Newport Offers a Romp in the World of Spirits 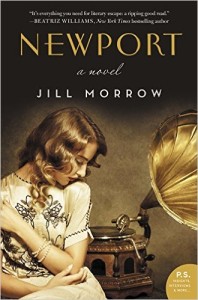 Have you ever wanted to talk with someone who’s passed over to the other side? Have you ever felt like a deceased loved one is trying to contact you? In Newport, the latest novel by Jill Morrow, the door between the world of mortals and the world of spirits is flung wide open with drastic results. The intrusion of Elizabeth Chapman into a gathering of her husband, her adult son and daughter, Mr. Chapman’s lawyer, and other friends at the Chapman summer home in Newport, Rhode Island, changes the lives of the attendees forever. Elizabeth Chapman has been dead for 35 years.

One of Morrow’s strengths as an author is the authenticity of her characters, and Elizabeth Chapman is no exception. When the group has gathered in Newport in the Spring of 1921, Bennett Chapman explains that he plans to marry Catherine Walsh, a younger woman who is among the guests at the Chapman home. The purpose of the gathering is for Bennett’s lawyer, Adrian de la Noye, and his associate, Jim Reid, to draw up a new will to include Bennett’s soon-to-be new wife. Bennett’s children, Chloe and Nicholas, are outraged. How could their father turn over his fortune to this newcomer who is obviously a gold digger? According to Bennett, the explanation is simple. Elizabeth told him to marry Catherine.

Of course the obvious question is, how does Elizabeth speak to Bennett? The answer casts even more suspicion on the relationship between Bennett and Catherine. Elizabeth speaks to Bennett through Catherine’s niece Amy, who is also a guest at the house. Nicholas insists that Amy is a fraud, working with Catherine to take advantage of his elderly father. He demands that Adrian not change the will.

Jim insists that Amy has a right to prove she is not a fraud and suggests a séance for the group to allow Elizabeth an opportunity to speak through Amy, if indeed that is what is happening. Adrian says that if Amy presents reasonable evidence that she is communicating with Elizabeth, he will change the will. Otherwise, he won’t. Reluctantly, Nicholas agrees to the terms.

And thus begins a series of séances that bring Elizabeth front and center to show what a strong personality she is. From the first time she speaks through Amy—or Amy speaks as her, depending on what you believe—Elizabeth makes it clear she knows things about people at the gathering that they would rather not have revealed. Her comments—or Amy’s comments, or comments from Catherine, who is influencing Amy, again depending on what you believe—also suggest that one of the three has a plan for what is to happen next.

A skeptic, however, could make a case that Catherine is in control because she, too, is a very strong personality. As the days at the Newport summer home pass, some of the guests begin to suspect that Catherine and Adrian had a relationship in the past, although neither will admit it. Through flashbacks, Morrow reveals that relationship, showing Catherine determined to take charge of her life at a very young age and to resist any person or force that stands in the way of getting what she wants.

The questions and answers offered in Newport are equally provocative, leaving the reader to decide whether the resolution is just or not. Either way, the characters remain the novel’s greatest strength, and the plot seems to grow from them.

In the months since I read Newport, Elizabeth and Catherine have stuck with me, reminding me in their persuasive ways that I need to write this review. The same glee that always accompanied me into sessions of reading the novel sat with me as I wrote. Newport is one of the most entertaining novels I’ve read recently. I was sorry to see it end.

I look forward to reading this engaging book that you have introduced us to in this post. Thanks

I hope you will, Marilyn. I thought it was a lot of fun. I liked the characters, as I said, and the plot is full of surprises.