The Joy of Talking With Readers

In the past two months, I’ve been fortunate to have opportunities to meet and talk with readers and potential readers of Surface and Shadow. The point of a novel is to communicate, so it’s great to learn a little about how the story is being perceived and received. 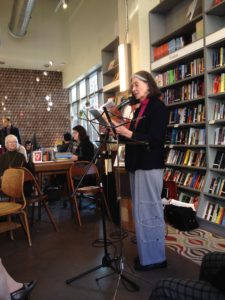 members of the Lit & Art Reading Series to read from our work at the Bird in Hand café in Baltimore. Bird in Hand is a popular spot, so it was filled with happy diners and some literary enthusiasts. People were frequently coming and going, which gave energy to the atmosphere. At intermission and after the readings, it was fun to chat with people about their literary interests. One nice literary magazine editor asked to review Surface and Shadow in his magazine, which, of course, pleased me tremendously. I’ll let you know when the review comes out.

Then on March 15, I was invited to speak at Authors Night at the Annapolis Regional Library Book Club meeting. This event was so much fun I forgot to take pictures, so I can’t share any visuals with you, but I can tell you it was one of the best book events I’ve been to since Surface and Shadow was published. The day before we’d had snow and ice, so I was afraid the event might be cancelled or at least attendance reduced. But the roads were clear, and hearty souls made their way to the library.

To create an informal atmosphere that I hoped would encourage conversation among all the attendees, I asked my friend Karen Bennett, who’s also a writer, to come along and ask questions in sort of an interview format. I figured that was better than having me talk for 45 minutes. Karen was great and soon everyone was asking questions. Many of them had read Surface and Shadow, even though the librarian, Pamela Bowling, said she had a hard time gathering copies from branch libraries because they were checked out (which is actually a good thing!).

Their conversation included specific questions about the novel and more general ones about the writing process. I learned they liked many of the characters, especially Stella, but some had concerns about Jeff. And some wanted to know what happened to Lydia next. I tucked that thought away for another novel someday.

I enjoyed meeting all of them and am very grateful to Pam for inviting me. 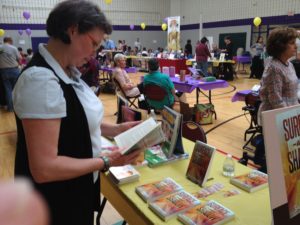 On March 25, I participated in the College Park, Maryland, Community Library Book Festival. This event attracted lots of families, including some who stopped in for a break from bicycling. Amazing how much the weather had changed in 10 days, offering blue skies and temperatures in the 70s. Many were interested in Surface and Shadow, and I never tire of telling people about Lydia and her struggles to find out about Howard’s death and to help Nancy.

One of my favorite readers was a woman who said she was buying Surface and Shadow for her mother-in-law, a strong, independent woman who lives in North Carolina (but she was going to read the 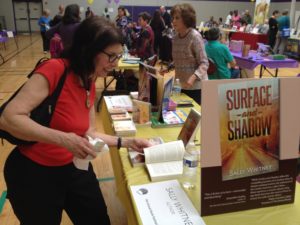 book before she gave it to her). I think both women will find Lydia interesting.